Last time around I introduced some ideas on working LF and VLF bands, and in this article I discuss some antenna designs which can be effective for making the most of these big signals.

There are two main designs for LF antennas with each one emphasizing a part of the electromagnetic signal. A loop emphasizes the magnetic portion of the filed, which makes it particularly useful for attenuating local electrical interference. The nulls are pointed toward the offending sources, which should, at least in theory, help desired signals come through more legible.

Antennas designed for the E-field emphasize the electrical field of a signal. These antennas are typically whips by design, and can be useful in attenuating unwanted H-field, or magnetic, parts of the signal. Note that these only work in close to the radio—they cannot affect interference which comes from a long distance away. The reason for this is both the E- and H- fields stabilize or “reacquire” their standard 90-degree pattern within about a half-wavelength of their source.

The advantage to having both types of antennas available means one or the other antenna will likely help to reduce local interference, perhaps significantly. At any location there will always be signals with both E- and H- components, so nothing will remove all interference (and beware of exaggerated claims by anyone promoting a particular antenna!).

Keep in mind too that a loop is inherently directional, and assuming one has the ability to rotate the loop, there will be some directivity to the antenna which might help with distant interference. An E-field antenna is omnidirectional, which means it will not have any significant nulls for reception.

Additionally, it is more likely to affected by screening effects such as buildings, proximity to the ground, and other sources of interference. Loops on the other hand can be used in tighter quarters, and are often effective even in the home such as in the attic or other suitable places. Passive E-field antennas are tuned similarly to any other standard antenna, but usually with the addition of a pre-selector as mentioned last time for filtering out unwanted broadcast AM signals. 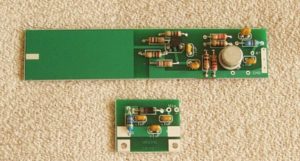 There is another version of the E-field antenna called an active E-field (or an E-field probe) which uses a high impedance buffer amplifier to match the active whip to the low impedance receiver. This allows for a fairly broadband antenna which can also be quite small. Many such antennas are no more than a few feet long. They must be placed outside if at all possible, but can be made quite stealthy due to their small size. They should also be elevated to reduce the effects of ground reflections. 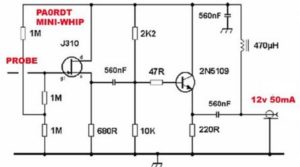 A popular version is the PA0RDT MiniWhip  E-field probe antenna designed by RD Bakker of the Netherlands. This can be purchased as a kit or fully assembled off the Internet. Since I like to build things anyway I got the kit version for under $20 shipped, and as can be seen here is not particularly complicated to build. Some folks have even gotten the parts and assembled it “dead bug” on a piece of wood. I like printed circuit boards myself, but that is just me.

These are broadband antennas which can extend well up into the HF range, but most people find their limit  to be 80 meters or at most 40 meters. Some folks have noted very acceptable response all the way up to 20MHz. Voltage (+12) is fed to the antenna by way of the coax (not included) from a bias T-network (the small board) located at the receiver. The preamp is fed at the base of the antenna with the DC supply fed
through the coax.

Location is everything with these small antennas, and so a lot of experimentation will show where the best placement is at a given location. Keep in mind even slight changes can make a big difference, so take some time to scout out the best spot. We need every advantage we can get!

Small loop antennas are fairly common, particularly for AM broadcast bands and used to couple with the internal ferrite bar antenna of most AM radios. The antenna design concept is similar, but we are not looking to couple with an internal antenna in most cases. However, this is not to say this type of system cannot boost signal reception. Ideally the loops will be a bit larger for our purposes here, and while there are numerous designs around, a common design will be mentioned here just for completeness.

Loop antennas tend to be very narrow-banded, meaning they have a high-Q, and so they are useful for blocking a lot of unwanted interference and or intermodulation. This also means re-tuning will be needed quite often, but the trade-off is well worth the advantages.

For the 500kHz band about 15-20 turns of a wire around a 3’-square X-shaped wooden frame is usually sufficient. For the 136kHz band about 30 turns should do. A slight notch along each corner wide enough to hold the turns of wire can keep things in place a bit better, or one could make a notch for each wire if desired. A variable capacitor is used for tuning the loop, and at this size, most operators prefer adding a preamplifier to the circuit to boost reception. As an alternative, a larger loop may be made, say 6’-square, which might be enough to eliminate the need for a preamplifier.

Whether listening by ear or used in conjunction with software on the computer, there are many interesting signals to be captured at these low frequencies. In addition to CW and Beacons, there are the common QRSS digital modes (differentiated by the length of time each character is transmitted), as well as LF versions of WSJT-X and WSPR for receiving and mapping contacts.

Each area offers a lot of room for investigation, as well as experimentation with an E-field or H-field antenna. Direct comparisons will go a long way in helping to decide which antennas work best with which modes, and there is the opportunity to help others who are experimenting with different transmitter setups to see where their signals are reaching. The WSPR software can be left on overnight with automatic uploads to the mapping site, so users from around the world can tell if you are hearing them. Of course,
there is nothing wrong with staying up all night yourself now and again to catch the action live!

I hope you will give these bands a try both for amateur bands and for beacon work. There is a lot of activity going on below the AM bands, so give it a go and see how much fun it can be!

Originally published in the April 2017 issue of the Q-Fiver.

This entry was posted in Blog. Bookmark the permalink.