November saw the first of our regular ARDF style on-foot foxhunts, held at Sharon Woods. There were a total of 7 hunters trying to find 5 transmitters on the 2m band. I helped Phil set up and place 5 of our 2 meter transmitters around the park, and helped people set up their equipment and get started. 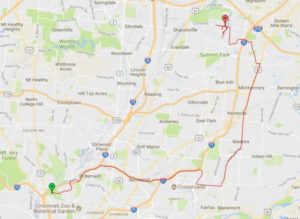 December was the last mobile hunt of 2017, and Dick WB4SUV and Brian K4BRI were very close in points. We continued with the staggered starts, 3 minutes apart, and we had 4 teams participate. Marji and I started third, and got a signal about 70 degrees. We went to 75, took the Norwood Lateral, and got on 71. Since I thought the signal was east, we got off at Red Bank—but once we got off, it lead us north, so we turned on Madison and just started heading north. Once we got to Blue Ash, I was thinking near the old airport, and as we crossed Reed Hartman, it said behind us. We made a few more wrong turns, and finally found him behind a McDonalds.

Dick had found him before us, so he was first in points for 2017—way to go Dick!

This entry was posted in Archive, foxhunt. Bookmark the permalink.