Julia KE8IUU is on the Air!

Congratulations to Julia (KE8IUU) on passing her technician license!

Julia passed her Tech License Exam on February 8th with the Milford Amateur Radio Club. She is 13 years old, a 7th grader at Walnut Hills High School in Cincinnati and an active member of the OH-KY-IN Amateur Radio Society. The ham bug bit her back in 2016 when she went to her first hamfast at the Dayton Hamvention with her father, Cesi – KD8OOB. She also enjoys operating OH-KY-IN’s GOTA station during their Field Day Operations and helping her dad with the 13 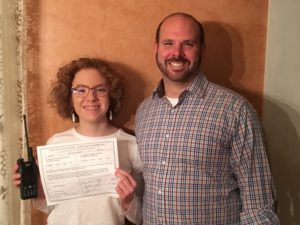 Colonies Special Event. To help motivate her studies, she was promised her own HT when she completed the test, which she received the following Saturday, a TYT MD-2017 from R&L. She not only wants to operate on the local Cincinnati analog repeaters, but also become active on DMR. Her current plans are to study for her General License in the summer after school is out and take the test in the early fall. Her goal is to work DX as she loves talking with people all over the world; she is thrilled every time she helps her father make a new contact and can’t wait to do it on her own!

Way to Go Julia!! We’re are so proud of you (and we promise to stop nagging you now, at least until its time to work on your General license!!). Julia has already gotten on the air and checked into our Newcomers and Elmers Net too! We look forward to hearing you on the air, so everybody take a moment and say hello to her!

This entry was posted in frontpage. Bookmark the permalink.

2 Responses to Julia KE8IUU is on the Air!