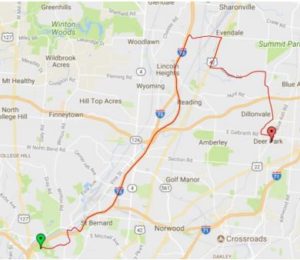 What a nice day for a hunt! The same 4 teams showed up for the September foxhunt, and most of us went pretty minimalist—just the basic gear. Nice signal from the start to the NE—we headed up 75—racing with Dick (traffic laws are optional during a foxhunt) and we decided to head east at Glendale Milford Rd. It lead us down and around but generally strong signals. Finally getting to Blue Ash Road we spot the tell-tale Red F-150 behind a deli. Quick left-left and I touch the truck first—Dick is seconds behind me. Bill shows up right after that and Bob found him some time later.

This entry was posted in Archive, foxhunt. Bookmark the permalink.